By Marilyn Weber in Uncategorized on August 1, 2018. 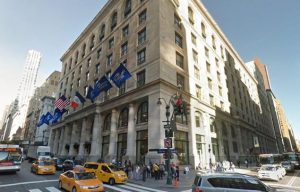 The Graduate Center is the doctorate-granting institution of the City University of New York. The only consortium of its kind in the nation, the Graduate Center draws its faculty of more than 1700 members mainly from the CUNY colleges and cultural and scientific institutions throughout New York City.

We are two blocks east of Penn Station, one block east of Herald Square, and two blocks west of the 33rd Street and Park Avenue station on the 6 train. The next closest subway station, located at 34th Street and Avenue of the Americas, is served by the B, D, F, N, R, and Q trains.

Penn Station is served at 7th Avenue by the 2,3, and 9 IRT trains, as well as the A, C, and E lines at the 8th Avenue station one block west. Detailed information on bus and subway transport in New York City can be found at the website of the Metropolitan Transportation Authority (MTA).

From Northern Manhattan/Upper East Side, M4.
From Upper West Side/Harlem, M10 south.
From Downtown/West Side, M10-north.
From other Manhattan locations, any north-south bus to 34th Street and transfer to M34 or M16. Disembark at Seventh Avenue.
From Northwest Queens, take Q32.

Need help with the Commons? Visit our
help page Send us a message

Built with WordPress Protected by Akismet Powered by CUNY